Ever since Google mainstreamed Knowledge Graphs in 2012 through a pretty popular blog on enhanced web search, enterprises have realized that the foundational technologies that make web searches smarter can also be used for more effective enterprise data interlinking and searching. The realization has led them to foray into creating what are known as Enterprise Knowledge Graphs. If you are unfamiliar with them, you can think of them as sophisticated mind maps of people's knowledge that are easily shareable. If you are familiar with them, please do accommodate the liberties with the working explanation above. 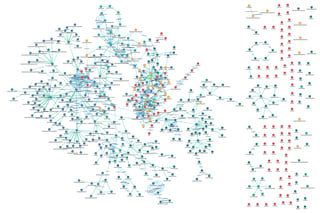 Knowledge Graphs have gained in prominence of late. All major search engines use them to make searches more intuitive. Social media giants use them to make user interaction more engaging. Start-ups have sprung to offer them as a service. Information providers, ranging from prominent newspapers to data vendors, are reshaping their data into Knowledge Graphs to open up new frontiers of data-driven applications. Several enterprises have creative pursuits underway, more often than not, in their nooks and crannies that target point applications. And a select few companies (that are not information providers) have built large Enterprise Knowledge Graphs that are put to use everyday to solve hard business challenges at unmatched scales, efficiencies, and speeds. The aim of this article is to characterize some of the common attributes that I have seen at play in undertakings of the last kind.

Why do companies build them in the first place? Broadly speaking, there are at least three reasons:

Enterprise Knowledge Graphs have matured into a competitive advantage. Examples of such advantages that I am a witness to include significantly faster informatics turnaround times for a leading material sciences company and shaving a couple of weeks off regulatory filings for a pharmaceutical major. Time is, unfortunately, running out for the laggards. A few short years from now, not having an Enterprise Knowledge Graph worth its name will be a competitive disadvantage, not the norm.

They are natively structured to be accessible by users of varying IT proficiency levels. A well-engineered platform enables self-serviced data discovery and analytics to cater to most day-to-day information requirements. As a result, ideas sprout and blossom in a temporally relevant manner throughout the user base cutting across technology- and bureaucracy- induced echelons. The much bandied phrase of "data democratization" is truly manifested by an elegant solution.

A standards-compliant Enterprise Knowledge Graph, while retaining the advantages described above, is vendor agnostic and easily interoperable with diverse technology stacks. Enterprises can thus not only leverage the full potential of their data in the present but also ensure that the data is not a prisoner of a tumultuous vendor and/or technology landscape of the future.

While their value is relatively easy to prove, building one that meets the rigors of wide adoption and use is a nuanced exercise. In my understanding, there are three pillars to the edifice of a successful Enterprise Knowledge Graph: the People that envision it, the Data that constitutes it, and the Product used to build it.

A Persona Grata - the People that envision it

As far as these solutions go, their successful deployment is first and foremost anchored to a bold and realistic vision. The most effective visionaries I have met operate at the intersection of some form of business-critical subject matter expertise and technology. They understand technology enough to realize how much of a game-changer the concept is when compared to legacy systems, and leverage their business acumen to articulate the value proposition of enterprise-wide adoption in tangible terms. Such persons or teams are tasked with scouting for radical, not incremental, solutions to their present and future business challenges. Some character traits that pop up too often to be considered coincidental include an innate sense of curiosity to peek under the hood to understand a product, healthy skepticism to separate wheat from chaff, and enough confidence in the vision to accommodate challenges and help resolve them.

Same Same but Different - the Data that constitutes it

The value and scale of adoption of an Enterprise Knowledge Graph are directly proportional to the diversity of data encompassed by it. The bane of numerous data engineering efforts is unmanageable data diversity. They shine particularly bright in this regard as the graph model is designed to be flexible enough to accommodate changes in context and addition of new information. A critical factor to note in this context is the high data volume that is often attendant to the data diversity. Unlike relational databases, scaling graph to store and analyze Big Data is a code that very few companies have cracked so far.

What Lies Beneath - the Product used to build it

A successful Enterprise Knowledge Graph cannot exist in isolation; it needs to be an integral part of an organization's information ecosystem. The knowledge graph needs to be, among others, well-governed, secure, easily connectable to upstream and downstream systems, analyzable at scale, and, more often than not, cloud-friendly. The product used for creating a modern Enterprise Knowledge Graph thus needs to be optimized for automation, support connectors for a wide array of input systems, offer standards-based data output to downstream systems, render any volume of its data analyzable rapidly, and make governance user-friendly.

The confluence of appropriate People, Data, and Product is a critical success factor. Do consider factoring in these variables prior to venturing into building yours. Good luck!

This blogpost originally appeared on LinkedIn.